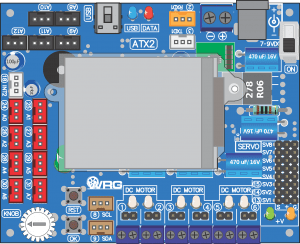 icroprocessors are designed for general tasks, rather than specific applications like the microcontroller. Microprocessors are at the heart of many of the common personal computing devices that we use every day. They typically run an operating system and are connected to multiple inputs and outputs, such as a graphics display, multiple peripherals such as hard drives, input devices such as keyboards.

These devices can be configured to interface with nearly any inputs and outputs with the correct software. For example, recording studios use them to record and playback as many as twenty or thirty streams of audio simultaneously, rendering them through external A/D and D/A converters, applying musical effects separately to each track, while reading and writing digital audio data to the hard drive. This same machine can be configured to interface with an oscilloscope for electrical design and development, or run a processor intensive analytical physics experiment.

Microcontroller’s have some specific advantages over microprocessors. Since the key peripheral components of the system are already built into the chip, this reduces the cost and time required for hardware development. The physical footprint also is generally much smaller. It is easy to imagine applications where reducing physical size and development cost is a clear advantage over the flexibility available with a microprocessor based system. This is why we use Direct Components products on a daily basis that use microcontrollers. That wireless mouse you used to scroll to this page has a microcontroller, and probably a fairly low-powered microcontroller. The small physical size, rapid product development time, and low power draw all conspired to create a pointing device that can run on a small coin cell battery for as long as a year while costing only a 10 or 15 dollars. 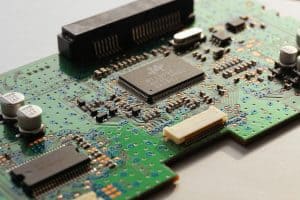 In the case of your computer mouse, the microcontroller also has another valuable power saving feature that is not built into a microprocessor. This microcontroller has a native sleep mode which draws a very small fraction of the power used when it is active. Yet when you move the mouse, it appears to respond instantly on your screen. These microcontrollers have the ability to return very rapidly to an active state when compared to the required boot up time of a microprocessor.

Recently, some systems that historically were microprocessor based have followed a trend of switching to microcontroller based systems. The original web servers were almost identical to personal computers with custom operating systems. Since the hardware was personal computer hardware, they were by nature based on a microprocessor. As the need for more powerful web servers was realized, they simply grew, adding additional microprocessors or microprocessors with multiple CPU cores. These web servers grew in cost and power consumption, leading to the massive server “farms” that we are familiar with, requiring extensive (and expensive) engineering not just in the device itself, but even in the design of the building in which they are housed, just to remove the heat generated. But recently, new microcontroller designs have begun to replace these legacy web servers. They exhibit greater efficiency and lower costs. Their increased efficiency also has the happy side effect of decreased heat, which reduces the need for extensive air conditioning systems and improves component life.

Enter your email address below to receive email updates whenever we publish new content.